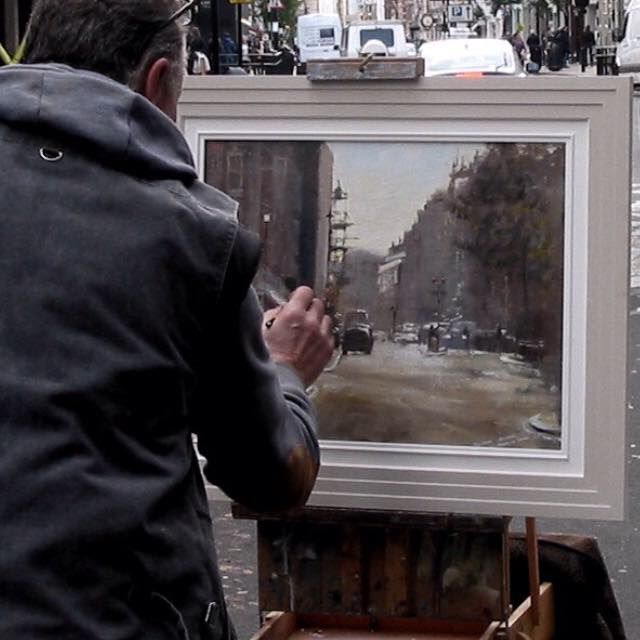 It all began for me as a schoolboy, I will always remember the first time I walked into the schools art rooms, the smell of the oil paint, clay and poster paints was fantastic. I took to my art teacher straight way and at the end of my first lesson he said to me “have you ever used watercolours?” I looked at him “no not really” I said, I had never used any paint before. “Try these watercolours lad, see what you can do with them” and he handed me some paints and a few sheets of watercolour paper, they must of been his own supply so I felt very honoured and rushed home to try them. It was wonderful trying something new, and I was instantly hooked. Needless to say I still get the same satisfaction now every time I lift a brush.

As I developed my skills with paint I soon found subjects that really inspired me, such as marine and cityscapes.

When I started my working life in London as a printer, I found myself going out after work sketching on a regular basis.  One day when painting in Bow lane, near St. Paul’s, a guy approached me – who I later discovered owned Glory cards in Bow Lane – and wanted to buy the painting from me, he asked that I come down to his shop when I had finished, that was my first sale ‘off the easel’.

I have over the past few years painted with the Wapping group of artists as a guest. The Wapping Group itself is a prestigious art group of only 25 statutory members and was established in 1946 with the initial intention of recording the busy life of London’s docklands but in more recent times wider area is explored covering venues anywhere between Henley and the Thames Estuary. I am very proud to say that I was elected as a candidate in 2016.

I am a member of the United Artists and had my first exhibition with them in 2016, and have had many successful solo and group exhibitions throughout London since the early 90’s.

Summing up, these nothing I like more than escaping and loosening ones self into painting, it gives me a chance to forget all life’s pressures momentarily and come away with a memory which encapsulates a moment in time.

Thank you for your interest and I hope you enjoy viewing my paintings as much as I enjoyed painting them.

Graham has had several one man shows from 1990 to date

Rye Art Gallery October 2016 with the Wapper group of Artists

The Mall Galleries The Wapping Of Artist March 2017